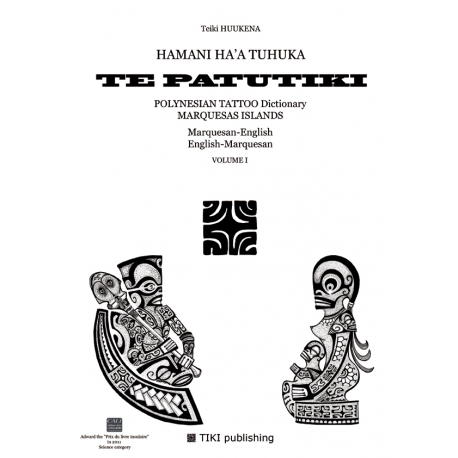 This work regroups a large number of symbols used in the practice of Patutiki (Marquesan tattooing) In Henua Énana, "the land of men" (the Marquesas Islands archipelago in French Polynesia).

The signification of many of these motifs was lost over time and most of the symbols remained unexplained for a long time. This mysterious nature was at the cause of the amalgam of different Polynesian tattooing styles, (Maori Tamoko, Tahitian Tatau, Samoan Peá and Marquesan Patutiki...).

Nowadays, there is all too often an unintentional misuse and improbable mixture of motifs having a combination of different symbolic meanings (from one archipelago to another, one island to another, one valley to another and from one family to another...).

Patutiki is globally, the most widespread form of tattooing in the realm of Polynesian tattooing, because from the beginning of the 19th century until the beginning of the 20th century, Russian, German and American scientists recorded the archipelago's "mysterious symbols". This resulted in the publication of several very complete works about the Marquesans and their art.

Patutiki graphic techniques are the most widely used of techniques, however, very few people know about their real origins and even fewer their meanings.

Erroneous or even reinvented definitions of these ancestral symbols propagated by communication tools, such as Internet, television or the press, drove the author from Nuku-Hiva (Marquesas Islands), to do very thorough research, with the help of Marie-Noëlle and Pierre Ottino-

Garanger who are both Doctors in anthropology and archaeology.

The author redrew and classified each symbol so that you may better understand their meaning (as each individual one may have several significations…), thus making them easier to understand for everybody.